In his books, Zero Limits and At Zero, acclaimed author Joe Vitale suggests a modified version of an ancient Hawaiian healing technique called Ho’oponopono, which simply consists of repeatedly and mentally uttering four simple statements or phrases. He believes that when combined with the power of belief they have the potential to cleanse your consciousness and remove all hurdles from your ways. He claims that the technique brought miraculous results in his own life and in the lives of many who learned the technique from him. The following are the four phrases, which he said any one can repeat continuously for self-healing.

This healing technique is based upon the power of three important virtues: love, forgiveness, and gratitude. You do not have to think too much what those words mean. You have to just keep repeating them. It should work if you unconditionally believe in it with the innocence or the faith of a child, and practice it persistently. Mr.Vitale also suggested that during the cleansing process it is very important to surrender your intention to God or the Divine and focus your mind just on the repetition of the four phrases.

The technique probably helps you to reset your life and remove the negative energy and undesirable thoughts from your mind, which in itself can bring a tremendous change in your thinking and behavior and lead to peace and happiness. I practiced it for a few days to test its effectiveness. I must confess that a day after I began repeating the four phrases, my wedding ring, which I thought I lost a year ago, was miraculously found by my wife in our garage. Now, you can say it was coincidence. May be, but it did happen a day after I started practicing this technique.

Nevertheless, I am not sure whether this technique can really set you free, in the sense whether it can liberate the soul from the cycle of births and deaths (samsara). The idea of liberation is not found in Hawain tradition. It is peculiar to the traditions of Indian origin. As the author claimed, it can remove mental blockages, and probably free some souls from persistent desires and attachments, which prevent them from leaving the earth. However, I do not know whether it can cut the cord of rebirth to which the soul is tied.

Brain consciousness or the Robotic mind

In Hinduism we believe that the individual soul (Atman, which is generally stated as Self) is eternal and different from the brain consciousness. The latter can be best described as a container of perceptual consciousness, because it is created by the senses. You may say it is the outer layer of the soul, next to the body.

From a Hindu theological perspective, the brain consciousness has two layers, an outer layer of memories formed out of perceptions (manas) and an inner layer of intelligence (buddhi), which makes use of memories, imagination, discretion and emotions to make sense of the world. We may also call them the perceptual mind and the thinking mind. Together, they constitute the robotic (programmed) mind or what we read in the scriptures as the impurity that accumulates around the deeper soul consciousness and holds it in bondage. The perceptual mind is the main culprit. By creating desires and attachments, it influences (programs) the thinking mind and corrupts it.

The outer consciousness, consisting of these two layers, is the domain of Nature. It operates mostly mechanically, according to set principles, laws of physics, logic, mathematics and chemistry. It is the mechanical in its function, a warehouse of data, algorithms, and recursive programs, that helps you to perceive and make sense of the world. We also call it kshetra, the (playing) field of the soul. The soul consciousness, according to Hindu scriptures, belongs to the domain of God or Brahman. It is not dependent upon the field or the brain. It exists eternally. When it is drawn into biological matter (body), it becomes embodied soul and becomes subject to the corruption of perceptions and cognition caused by the perceptual and thinking minds respectively.

In between the inner layer of soul consciousness (soul) and the outer layer of brain consciousness (mechanical, or robotic mind), you have another layer, made up of dominant desires, latent impressions and habitual thought patterns. It forms like a hard crust, precipitation, or a layer of cream, upon the soul consciousness due to the activities of the mechanical mind in the perceptual world. Traditionally it is called casual self or Karana citta. We can call it seed consciousness, because it is responsible for the causative (karmic) rebirth of the soul. A diagrammatic representation of the different layers of consciousness is presented below. 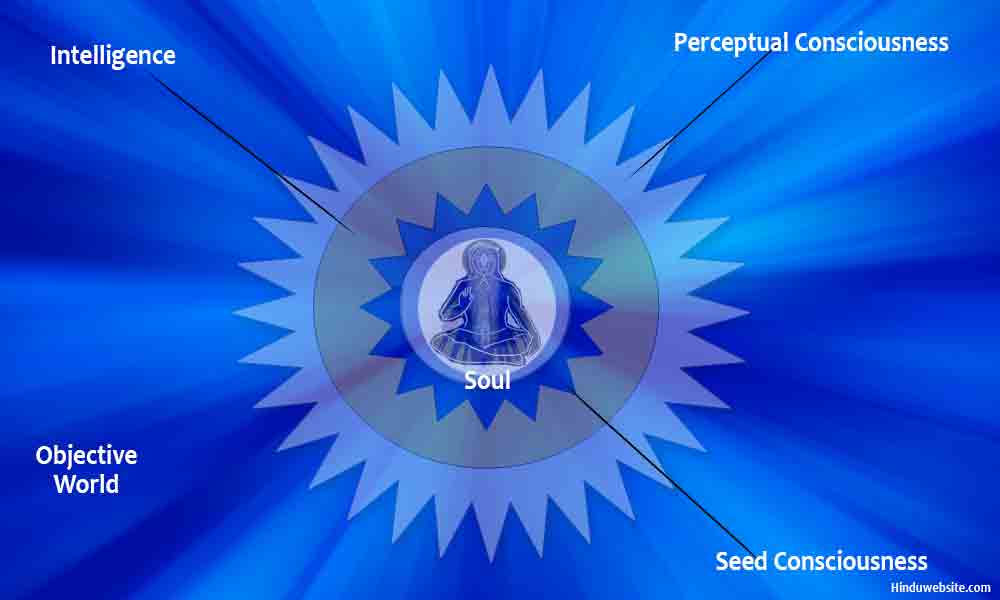 At the time of death, the brain consciousness is completely dissolved or recycled as the body is consigned to the flames and its parts disintegrate into their elemental states. However, the soul consciousness and the seed consciousness consisting of latent impressions escape from the body and go to the next world, where it will stay according to its past deeds and returns to earth to take another birth and continue its existence.

The cause of rebirth

As long as the seed consciousness exists as a layer of impurity around the soul, the soul is bound to the body and the cycle of rebirths. When they are present, the being (jiva) also experiences suffering in the form of modifications (vrittis), afflictions (klesas) and pain (dukha). They arise mainly because of the impurities (malas) present in the being. These impurities cannot be cleansed with simple healing techniques such as the one mentioned before. You need a more comprehensive approach.

Thankfully, I do not have to invent a new method of self-healing for this purpose and copyright it. The ancient seers and ascetics of India already found it in their meditative states. The techniques that they invented to cleanse the mind and body and prevent rebirth are at least 3000 years old. About 2500 years ago, they were collectively preserved for future generation by Patanjali under the discipline called Yoga. The system, which he either merely recorded or improvised, uses eight different methods to holistically cleanse the mind and body whereby the soul is freed forever from the rebirth process. Each of the methods suggested in the classical yoga, is a self-healing technique to purify the mind and body and remove the obstacles. Their regular practice results in the complete annihilation of the seed consciousness, whereby one is permanently freed from past karmas, and enters the original state of soul consciousness. In Patanjali’s yoga this state is called, “self-absorption without seed consciousness,” (nirbija samadhi).

I am not elaborating here the eight methods of self-healing. Some people use yoga to heal their bodies, and some do it to heal their minds. However, the practice is incomplete, if people focus only upon the body or the brain consciousness. For complete results, the practice must penetrate into the deeper layer of the seed consciousness and burn all the latent impressions of previous births and the associated fruit of karma. Only then the transformation or healing is complete, and a yogi becomes liberated.

Those who want to know about the eight traditional practices of yoga may read the articles and resources, I listed at the end of this discussion. Here I will focus upon a few important and related practices that will gradually purify the robotic mind, and the physical body, whereby the seed consciousness is gradually weakened and burnt away.

1. Cultivation of purity: It is where positive thinking, practice of virtues such as nonviolence, truthfulness, humility, fasting, restricted dieting such as vegetarianism, self-healing techniques such as Ho’oponopono, or Reiki, mindfulness practices, chanting of mantras, prayers, affirmations, devotion, etc., play an important role.

2. Cultivation of detachment: Detachment means you have to mentally let go of everything, including your intention, and surrender to the will of God to let things happen in the universal scheme of things without your interference. Detachment does not mean absence of desires. You can have desires and intentions, but you should not be unduly worried or anxious about their outcome and you should not willfully act upon them. Every intention is like a starting point in the ocean of existence. If you act upon it willfully, it creates ripples and subjects you to consequences. Hence, you must let God or the forces of Nature do their work in response to your intention, according to their best wisdom. When you are detached from things, you become mentally free from the things that bind you and hold you in their control. Your mind and intelligence will then work with crystal clarity, in harmony with the Will of God and achieve miraculous results. 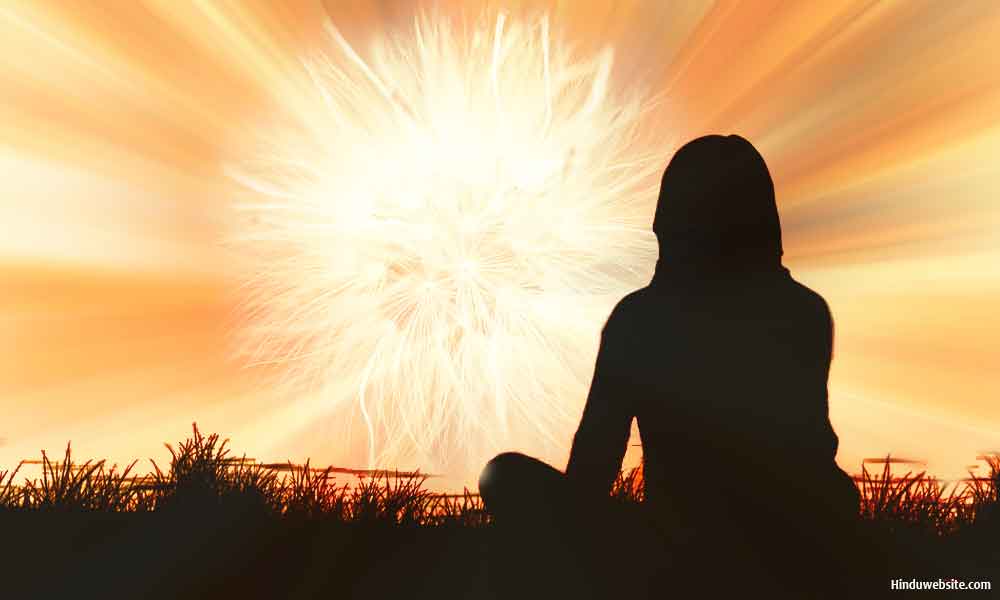 3. Centering in stability: The soul consciousness is stable and free from dualities, in contrast to the brain consciousness, which is always in a disturbed state as it is driven by duality, desires and attachments. According to the tenets of yoga, if you practice point 1 and 2 perfectly, it will automatically lead to this final stage, where you remain equal to all dualities and enter a tranquil state. In that state you remain calm amidst storms and look at the world with the eyes of God, without judgment, emotion or reaction. You will become an enjoyer of the spectacle of life, without becoming involved or entangled in it. This state is called the stable state (sthitha-prajna). It is the also the original state of the soul, and the core of your consciousness. When you enter the state, you will be free from the rebirth process. We call it liberation or freedom from embodied life (jivanmukta).

In conclusion, I would like to suggest that you can continue to practice any self-healing techniques that you are currently practicing. However, it is better if you can combine those practices with the proven techniques of yoga to extend their power and potency into still deeper levels of consciousness. Any spiritual or self-healing technique you may practice must lead to the cleansing of the entire outer consciousness, so that your soul will automatically manifest itself. The soul does not need any purification. It is already pure. It has to be freed from the impurities, namely the impurities that clog the mind and body, and the seed consciousness that leads to its rebirth. If you clean these two layers through the practice of yoga or any technique that you may deem fit, your soul will eventually shine in your wakeful consciousness and heal many other beings whoever come into contact with it. Then you become a Guru, the Master, the remover of darkness, the cleanser, and the ultimate healer.

May God bless and protect you and…

May you always be